What kind of sherry did Frasier drink?

The sherry marketing board should have made more of the Crane brothers’ love of sherry. In every episode of the long-running sitcom Frasier there they were with their decanter and little glasses. There wasn’t a problem that couldn’t be solved by a drink and some up-market badinage. I occasionally used to speculate about what sort of sherry they would drink. The quality would be impeccable of course; Frasier only drinks the best wine. They do, however, get through a lot of it so that would rule out the more austere amontillados. It would  have to be something fine but extremely drinkable with an amber burnish. 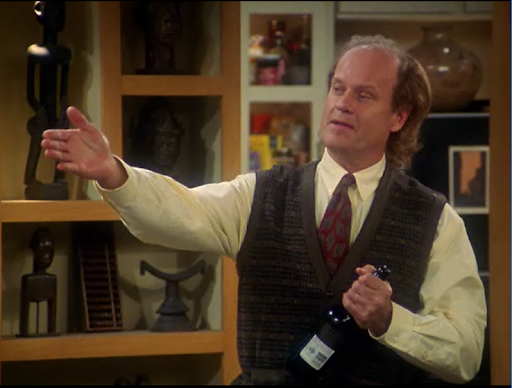 I can now reveal what they were actually drinking. . . it’s Harvey’s Bristol Cream. In Season 6 episode 9 Frasier decants a distinctive blue bottle. No wonder he decanted it. I cannot see that bottle going down well at his wine club. It seems odd that someone as pretentious as Frasier would drink something as everyday as Bristol Cream.  There can be three possible answers: 1) Daphne bought it in place of his usual sherry and Frasier and Niles cannot tell the difference; 2) the producers of the show just assumed that all sherry is the same; 3) Frasier likes Bristol Cream.

I like to think it’s number three. Bristol Cream is a comforting drink that invites conviviality rather than reflection. No wonder it is always served at funerals. Apparently if  you cellar it for 5 years, it loses its slightly cloying initial taste and becomes rather elegant. I haven’t tried it though I did try something similar a few years ago when my grandfather died. In his cellar, amongst the half bottle of 1937 Army & Navy claret, a 1982 Mouton Cadet and an ancient Beaujolais Villages (all vinegar), we found a magnum of Williams & Humbert Dry Sack. My father estimated it had been there for 20 years at least. There was a lot of sediment but the wine once decanted was lovely – gently fruity, nutty and off dry. Just the kind of thing I imagine Frasier would have taken comfort in after another humiliating date.

Williams & Humbert, produce a Dry Sack Fino and Dry Sack Medium both for about £10. I imagine the latter is closer to my grandfather’s. Very nice now though even better if kept for 20 years.

I’m a drinks writer. My day job is features editor at the Master of Malt blog. I also contribute to BBC Good Food, the Spectator and others. You can read some of my work here. I’ve done a bit of radio, given some talks and written a couple of books (Empire of Booze, The Home Bar and the forthcoming Cocktail Dictionary).
View all posts by Henry →
This entry was posted in Film and TV, Wine articles and tagged Bristol Cream, Frasier, John Harvey & Sons, Niles Crane, Sherry, Williams & Humbert. Bookmark the permalink.

47 Responses to What kind of sherry did Frasier drink?