Budget bargains from the Wine Society part one

I’ve been a member of the Wine Society for so long that I faxed my very first order which seems bananas to even contemplate now. Though I like to think that there’s a colonel in deepest Worcestershire who stills faxes his order in every month. When I first joined, I imagined that after a few years shopping at the bottom end of the list, in a few years I’d be buying en primeur Bordeaux and vintage champagne. Well it never happened, I’m still buying the same old wines even though some have nearly doubled in price. So in these dark times etc. etc. I thought it would be useful to share my unrivalled knowledge of the bottom end of the the list. These are all wines that I have enjoyed multiple vintages of and never disappoint. None will cost you more than £11 a bottle. Today I’ll do the reds and later in the week some whites. Let me know if there’s anything I’ve overlooked. With wines like these, you never need to leave the house. Useful, as soon you might not be able to. I am praying that the Wine Society vans will keep running. 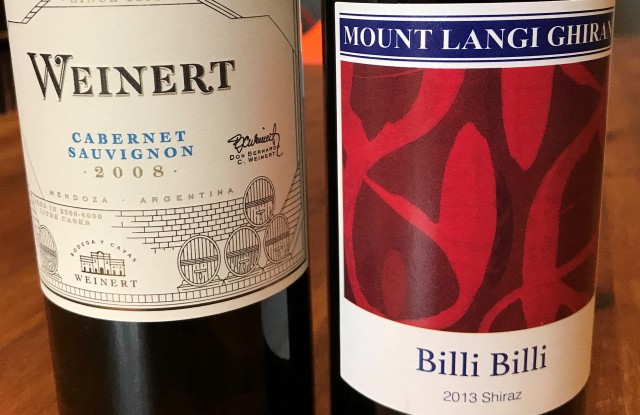 A toss up between this and the widely available Guigal Cotes-du-Rhone as my favourite budget wine from this region. It’s all ripe strawberries and mellow spices. As you can see from the vintage, it ages beautifully too. Where else can you get a sub £9 mature Rhone of this quality?

Head buyer at the Wine Society, Pierre Mansour, once described this as a sort of Australian Rioja. And I can see what he means, it majors on American oak without ever overwhelming the raspberry and bramble fruit. It’s a good one to give to people who think they don’t like Australian wine. Its big brother, Exhibition Victorian Shiraz, is a total steal, btw.

My friend refers to this as the funky Mendoza and in some vintages, blimey is it funky. A blend of malbec, cabernet and merlot aged in large old oak barrels until it’s mellow and good. A world away from most Argentine wines, it’s more like old school Rioja or Chateau Musar. The cabernet (see photo above) is always excellent, a bit more refined than the Carrascal but still unashamedly old fashioned. At the moment the Wine Society has the 2008 vintage.

Rioja seems to be something of a theme here. I’ve compared two wines to Rioja and now here’s the real thing. This is for those who like  the old fashioned style like Tondonia, but are on a budget. Made by Bodegas Palacio, it’s all about the American oak but they haven’t stinted on the fruit either. Also check out the Urbina range (crianza and gran reserva) if you like mature Rioja, the wines are absurdly undervalued.

Cheap pinots seem to fall into two categories, the insipid and the jammy. Somehow this wine from the Auvergne (which I always have to google, it’s nearly in the middle of France just to west of Lyon) manages to be neither. It’s a bit rustic and stalky with masses of dark cherry fruit. Not elegant but always delicious.

Garnacha (grenache in French) at its best, like here, comes across like a sort of boozy pinot noir. It’s light in colour, fragrant, delightfully drinkable, and good chilled. I always have a few bottles in the house as its so versatile. Just watch out as it’s much stronger than it tastes. For garnacha lovers, I’ve rounded up a few wines here.

Cabernet franc from the Loire is one of my all time favourite wines. It’s that slatey refreshing edge that makes it so addictive. Forget about wine and food matching, just get a load of this in, chill if slightly and it will go with pretty much anything. If you get a taste for cab franc, this Saumur-Champigny is worth trading up to.

Dão makes some of Portugal’s most distinctive reds (you can read something I wrote on the region here). This is a great example, combining ripe plummy fruit, quite grippy tannins (this is not a Netflix and chill* sort of wines) and a floral herbaceous quality. It’s a serious wine at a silly price.

*I mean as a wine to drink without too much thought in front of the telly. A kind reader has informed me that this phrase has come to be a euphemism for casual sex.

I’m a drinks writer. My day job is features editor at the Master of Malt blog. I also contribute to BBC Good Food, the Spectator and others. You can read some of my work here. I’ve done a bit of radio, given some talks and written a couple of books (Empire of Booze, The Home Bar and the forthcoming Cocktail Dictionary).
View all posts by Henry →
This entry was posted in Wine articles. Bookmark the permalink.

12 Responses to Budget bargains from the Wine Society part one