Wellness is balls and crisps are ace 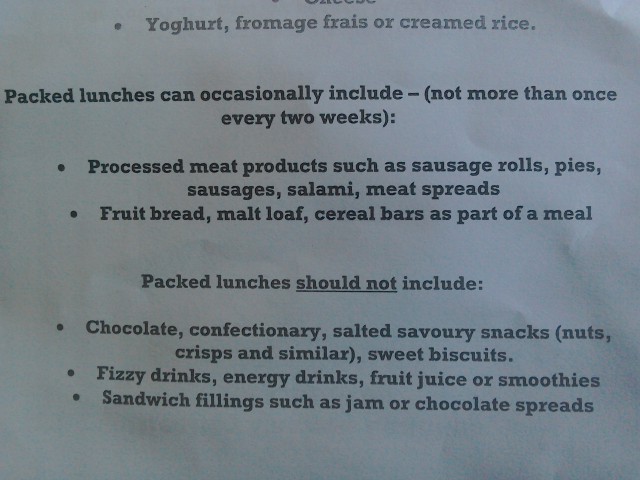 The above is a short extract from the two page lunch box rules booklet provided by my daughter’s school. Below is an article I wrote for the Spectator about crisps and biscuits. Also you may have noticed that I have changed the title of the blog. This is to reflect it’s role as a place to access all my writing rather than just my musings about booze.

To alleviate the pain of being sent back to boarding school, my mother would make potato crisps for my brother and me. She’d slice the potatoes carefully with a mandoline, lovingly fry them in sunflower oil, let them drain on kitchen towel and then sprinkle with sea salt. They were nice, but I hate to say this Mum, they weren’t as delicious as salt & vinegar Crunchy Fries, a now defunct snack similar to a Chipstick.  I tried adding vinegar to my mother’s crisps but they just went soggy.

When I’m abroad the thing I miss most about Britain is salt and vinegar crisps. Not any of that faux natural kettle chip nonsense but Golden Wonder (far superior to Walkers.) When it comes to crisps, the nation agrees that the classics are best. Earlier this year Richard Osman from the television game show Pointless ran a Word Cup of Crisps. Over one million votes were placed in a competition conducted on twitter. In the final pickled onion Monster Munch triumphed over Wotsits. Monster Munch aren’t even made from potatoes and they’ve never been near an actual pickled onion. They are cooked up in a laboratory and all the better for it. As a child I imagined crisp factories to be wondrous Willa Wonka-esque places full of mad scientists concocting crazy flavours.

In Britain we aren’t noted for our culinary prowess but we are good at processed food. As the first country to industrialise, we were the first to create food for the machine age. Canning brought good quality healthy food high in vitamins and nutrients to the working classes in industrial cities who had no access to fresh produce. Canning preserves fresh foods but soon scientists were creating entirely new kinds of food. Marmite, for example, is a by product of Burton-on-Trent’s brewing industry. It was in biscuit form, however, that industry and food found their apotheosis. McVities founded in Edinburgh in 1830 had a winning streak that ran from Chocolate Digestive in 1925 to 1985 with the launch of the Hobnob, the last great biscuit. They’re still made in factories in Carlisle, Stockport, Halifax, Harlesden and Glasgow even if Mcvities are now owned by a Turkish company.  It wasn’t all British ingenuity however,  flavoured crisps were invented in Ireland by Tayto’s in 1950s. The Irish food aisle in my local supermarket is a wall of Tayto’s. Their salt & vinegar is particularly fine.

When I was growing up crisps were considered a health food. They were made from potatoes, dammit. Well or maize and flavour enhancers in the case of Monster Munch. Plain digestives were positively ascetic. But now our great British foods are under attack. At my daughter’s school they are specifically forbidden from bringing crisps and biscuits in their lunch boxes. The cult of Wellness stalks the land with its pseudo scientific pronouncements against gluten, sugar and ‘processed food.’ We are told that sugar is as addictive as tobacco. Ella Woodward, the Nigella of Wellness, wrote how she became ‘totally-hooked on sugar laden convenience food.’ Jamie Oliver has campaigned successfully for a tax on sugar.

Wellness recipes substitute maple syrup for refined sugar but don’t explain why it’s healthier or more natural. They’re both sucrose and both come from plant sap. The American food writer Adam Gopnik makes a good point when he says ‘every attempt to say what nature wants us to do turns out to be what someone thinks we ought to.’  Cutting out gluten makes even less sense. In fact, unless you’re a coeliac, it’s probably detrimental to your health. There’s a nasty streak of snobbery in the Wellness movement: cheap foods that people like, biscuits, crisps etc are demonised whereas expensive organic foods are considered healthy.  Maple syrup is much more expensive than sugar. The sugar tax will disproportionately fall on the working class, the main consumers of fizzy drinks. In order to cut out gluten, the Hemsley sisters, currently starring in their own series on Channel 4 recommend substituting plain flour, 30p a kilo, with coconut flour at £5.

McVities tried a bit of substitution of their own in 2012 in order to make their digestive lower in saturated fat. Much to the horror of biscuit fans the new ones turned out to be oily and crumbly. There was outcry at teatime across the land and sensibly in 2014 McVities reverted to the old recipe. Classic British biscuits don’t take kindly to improvement. My wife attempted to bake chocolate digestive biscuits using organic  flour and high cocoa fat chocolate. We both took a nibble and agreed that they weren’t a patch on McVities.

The truth is that biscuits taste best when made in a big factory in Harlesden. ‘Processed’ and ‘convenience’ are dirty words nowadays when it comes to food but  I think they should be celebrated. On a sustenance level they have enabled our society to thrive but they can also be something unique and delicious. Bill Bryson referred to the chocolate digestive as “a British masterpiece. “ They’re Britain’s equivalent of Coq au Vin or Linguine Vongole except they’re available in every corner shop in the country. They’re a truly egalitarian delicacy.  So when I pack my daughter off to school with her carrots sticks and sandwiches, I like to smuggle in a couple of digestive biscuits wrapped in tinfoil. It feels like a subversive act and I know they’re good for her.

I’m a drinks writer. My day job is features editor at the Master of Malt blog. I also contribute to BBC Good Food, the Spectator and others. You can read some of my work here. I’ve done a bit of radio, given some talks and written a couple of books (Empire of Booze, The Home Bar and the forthcoming Cocktail Dictionary).
View all posts by Henry →
This entry was posted in Recipes and tagged Crisps, Golden Wonder, Hemsley, McVitie's, Walkers, Wellness. Bookmark the permalink.

5 Responses to Wellness is balls and crisps are ace