After Brexit will we go back to cooking with tinned mushroom soup? 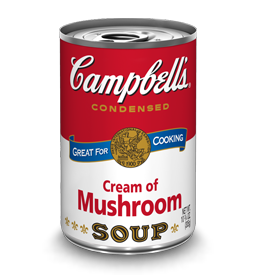 This is something I wrote for Food & Wine, an American magazine, just after the EU Referendum result. It’s entirely speculative but then most Brexit commentary is.

Much of the increasingly bitter arguments over the recent referendum boiled down not to matters of economics or democracy but to food. A friend of mine organised a campaign where Parisians came over to London bearing croissants as if to show us what we’d be missing if we left the European Union. The Sunday Times restaurant critic, A. A. Gill, wrote of how British bread used to be “brittle and gum-lacerating on the outside, hollow sawdust inside.” Now we have “wholemeal, wheat germ, rye, sourdough, poppy seed, caraway, brioche, sandwiches dunked, dipped, spread lasciviously, shared generously, communion.” In short, we’re now better fed, kinder and sexier thanks to the EU. Is this true?

There’s no doubt that food in Britain has improved immeasurably since we joined the European Economic Community (EEC), as it was then called, in 1973. My mother told me how olive oil used to come in tiny bottles at the chemist as a remedy against excessive earwax. Canned mushroom soup was a common ingredient in recipes (I hear this still persists in some parts of the States today.) I can remember a time when in most towns outside London the only decent food you could get after dark was Indian.

So what can we thank for Britain’s improved culinary standards? Immigration has played a big part. The British fell in love in particular with food brought by immigrants from the Indian subcontinent but our slumbering tastebuds were also awoken by cuisine from the West Indies, China, Lebanon, Vietnam, Turkey, Italy, Spain and Portugal. Later in the 00s, millions of Europeans especially east Europeans came to Britain lured by a booming economy. London is now a world city. Down the road from me there’s a row of shops containing two Turkish supermarkets, a pizzeria, a Polish and an Italian delicatessen.

The British began to travel more in the 60s and 70s thanks to cheaper air fares. This exploded in recent years because of airline deregulation. Suddenly a weekend in Barcelona wasn’t so expensive. There we discovered that tapas didn’t have to come out of a microwave. Improvements, however, also came from home-grown chefs such as Marco Pierre-White, Gordon Ramsay and Fergus Henderson who demonstrated that British food could be world class. Delia Smith, Jamie Oliver and Nigella Lawson showed the home cook how to make good simple food from scratch without a can of mushroom soup in sight. Britain became a much more affluent country in the 80s and 90s and people aspired to an Italian lifestyle.

We have the EU to thank for airline deregulation. Being a member also made it easier for people and goods from the continent to come to Britain though there was a sizeable European immigration before joining. It’s interesting to note though that it was Australian wine in the 80s and 90s that finally turned Britain into a wine drinking nation. Australia, a country about whose food even the British were sniffy about, has become a culinary destination without joining a bureaucratic superstate. The improvement in British coffee over the last 10 years is mainly down to baristas from the Antipodes. Food in America also improved drastically in the same period though you wouldn’t know from eating out in Harlan, Iowa.

So what’s going to happen when Britain leaves? There’s a lot of panicky articles being published at the moment but nobody really knows. Noone even knows when Britain will leave let alone what will happen afterwards. We hope that the politicians both British and EU can come to a sensible arrangement.  After all Britain is a massive market for European goods.

A big worry is the current uncertain status of EU nationals in Britain. Poles and Romanians in particular are vital for the functioning of the country’s food supply. They’re fruit and vegetable  pickers, drivers, butchers, waiters and bar staff. The country would grind to a halt without them. Worrying too is how the pound has fallen since the 23rd June making imported goods more expensive. Add that to the possibility of  tariffs on European food and I think though it’s safe to predict that the price of food and wine from the EU will go up.

The EU for all the benefits it has brought to members, is a protectionist trading bloc. Leaving should mean access to cheaper food from the rest of the world. Good for consumers but also good for Third World farmers. Also on an optimistic note, leaving the EU might end the current curry crisis in Britain. Due to targets imposed on non-EU immigration, there is a shortage of chefs from  the Indian subcontinent. Apparently east Europeans  just can’t be taught to make a good curry and British Asians (ie from the Indian sub-continents) don’t want to work long hours for low pay.  The other group looking forward to leaving are fisherman. The EU’s Common Fisheries Policy meant that every country in Europe had access to British waters, disastrous for fish stocks.

Don’t forget that home-grown food has improved hugely since 1973. Our daily bread, cheese, and sausages are so much better than they used to be. It’s a time of great worry and uncertainty, but whatever happens, I predict that we will still be able to buy good buttery croissants and there’s no chance in hell that we’re going back to cooking with canned mushroom soup.

I’m a drinks writer. My day job is features editor at the Master of Malt blog. I also contribute to BBC Good Food, the Spectator and others. You can read some of my work here. I’ve done a bit of radio, given some talks and written a couple of books (Empire of Booze, The Home Bar and the forthcoming Cocktail Dictionary).
View all posts by Henry →
This entry was posted in Restaurants and tagged AA Gill, Brexit, European Union. Bookmark the permalink.

2 Responses to After Brexit will we go back to cooking with tinned mushroom soup?