If you’re in London next Thursday (25th February), you might want to come to an event where I’ll be talking about smell, booze and literature with Odette Toilette at Libreria, a new bookshop in East London. She’s young, charismatic and knows a lot about perfume, and I like a drink. Happily there will be plenty to drink courtesy of Brighton Gin.

With gin like that, we’d be mad not to look at Graham Greene and Patrick Hamilton, but our voyage through the senses will also take in detective fiction, modernism and Giuseppe Tomasi di Lampedusa. If it smells or gets you drunk, it’s in.

Tickets are £15. Did I mention there’d be booze?

Like Loading...
When I worked for a publisher a few years ago we decided to have a party on Valentine’s Day because we were all much too cool to take part in such confected nonsense. Guess what? Nobody showed up, they were all at home or out celebrating with their lovers. Everyone pretends to hate Valentine’s day but I think, like me, most people secretly enjoy it. I love buying little gifts for my wife, getting a silly card made with old photos and, most of all, I love having an excuse to open a good bottle of wine. So this Valentine’s Day don’t be grump, buy some nice wine, put some jazzy music on and do some bloody romancing. (Or just ignore the whole thing rather than complaining about it on twitter). Whatever you drink, it’s got to have a frivolity about it. Hence why I’m picking this one:
–
–
St. Amour, Cote de Besset, Joseph Burrier 2013 £14.50 from The Wine Society
–
–
A good Beaujolais like this is the ultimate Valentine’s Day wine because it combines gaiety with interest. You can appreciate the cherries, the flowers and the touch of earth on the end, or you can just enjoy its straightforward deliciousness. Also it’s called St. Amour which is French for love. Can’t get more romantic than that. 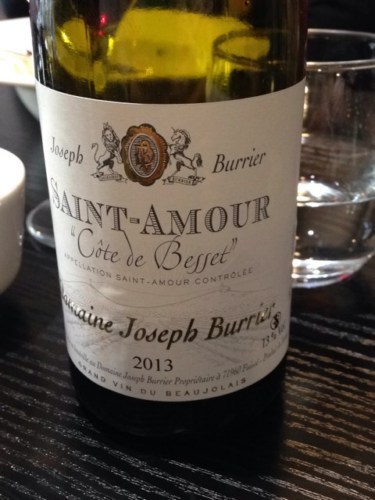 Where do you think the oldest Mourvedre vines in the world are? Bandol in Provence? The Rhone Valley? Catalonia? You’re not even close. They’re in Australia. The country that brought you the dubious pleasures of Yellow Tail is also home to some of the oldest commercial vines in the world.

Generally, the words ‘old vines’ (or ‘vieilles vignes’) on a bottle of wine have no legal significance. The phrase is used as a marketing ploy, trotted out ad nauseum and usually without regard for the actual age of the vines. But the reality is that old vines—real ones—make better wines. For as much as the phrase is overused, it does mean something in South Australia’s Barossa Valley. The region has an Old Vines Charter to catalogue its venerable vineyards—there’s a scale starting with ‘Old Vine,’ which mean anything over 35 years, and ending with Ancestor Vine, meaning 125 years old or more.

South Australia owes this extraordinary vine heritage to its isolated location and some enlightened governance. Whereas most of the world suffered the ravages of phylloxera, the vine eating louse, in the late 19th and early 20th centuries, South Australia protected its lucrative wine industry through strict quarantine laws. It remains phylloxera free to this day.

The vineyards of the Barossa Valley were planted in the 1840s to produce so-called ‘ports’ for the British Empire market. The biggest producer, Yalumba, was known as the Oporto of Australia. Those vines are still in family hands. Robert Hill-Smith, the vineyard’s managing director, told me that Mediterranean grapes such as Shiraz, Grenache and Mourvedre (known locally as Mataro) were planted for ‘high sugar accumulation’ to make the very sweet fortified wines loved by the British and Australians.

The taste for these fortified wines died out in the 1960s and 70s, as the Australian market turned towards table wines—especially Chardonnay. Sadly, many growers unable to sell their crops would pull up the old vines and replace them with white grapes. Some vineyards survived, but only just: At Dean Hewitson’s Old Garden vineyard, which was planted in 1853 with Mourvedre, the family would irrigate the crop heavily to produce diluted grapes, which then went into sparkling rose. Some growers literally couldn’t give their grapes away.

Men such as Robert O’ Callaghan, founder of Rockford, and the recently deceased Peter Lehmann, saw the shift as an opportunity. Just as Randall Grahm was doing in California, they bought up old vine Mediterranean grapes at rock bottom prices to produce distinctively Australian fine wines that Hill-

Smith now refers to as ‘rustic exotics.’ As late as 1989, the government was still paying growers to uproot old vines. But around the same time, Australian drinkers were, according to Hill-Smith, beginning to once again appreciate the “viticultural jewels in our backyard.” The backbone of what is now Australia’s premier wine, Penfold’s Grange, is made up of old vine Barossa shiraz.

In contrast to South Australia, Victoria’s vineyards were devastated by phylloxera. Australia’s states in the 19th century functioned as self-governing colonies with separate laws, railway gauges and even units for measuring beer. The wine industry in Victoria was nearly wiped out. But at Tahbilk, an hour’s drive from Melbourne, one old vineyard survived, protected from the louse by sandy soil. Phylloxera cannot survive in sand. Here they produce tiny quantities of a very pure, intense wine called ‘1860 Vines Shiraz,’ made from vines planted when Queen Victoria was in her prime.

Thanks to the current demand for old vine grapes, none of these wines are cheap—but then, compared to the disappointing 2011 Grange vintage, which Penfold’s is now selling for £500 a bottle—neither are they very expensive.

Wonderful image above courtesy of Yalumba.