Wine writers very rarely write about horrible wines. Their columns are full of exciting recommendations for readers to buy. There are two reasons for this. Firstly wine writers feel it is important to support wine as an industry. They think it is important that more people start drinking wine and then perhaps they will develop an interest and maybe even start reading wine columns. In this way they function like a provincial newspaper anxious not to be too negative about, say, the restaurant scene in Bolton in case readers decide they don’t want to eat out anymore let alone read a column about it. The second reason is that most wines these days are fine. Even the worst wine at Tesco’s will be merely dull. It’s easy to write about bad but it’s very hard to make a dull wine interesting.

Therefore, I was surprised this weekend when I tried a wine that made me gag. It was the Chocoholic Pinotage 2013. Now of course the name does make it sound nasty and it is made from Pinotage – the grape whose signature flavours are acetone and burnt coffee – but recently I’d had a bit of a Pinotage epiphany so was eager to try it. According to the bumf I was sent it is made from partially dried grapes like an Amarone. I’m a sucker for anything made from dried or partially dried grapes so I actually opened the bottle with something bordering on excitement. I took a sniff, it smelt of instant coffee and chocolate (note there is no actual chocolate in this wine), not a nice smell but a thing of delicate beauty compared with the taste. It’s quite hard to describe the flavour because I had such a visceral reaction to it, there was more coffee and chocolate and then POW!, it was as if someone had grabbed my throat and was trying to throttle me. I took another sip, and BANG!, a wall of acidity and raw tannin made me grimace involuntarily. I stopped sipping at this point. When that had gone, there’s a cloying finish like cheap coffee ice cream. Yes this wine is actually sweet. 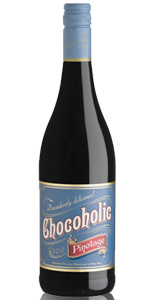 I would say avoid at all costs but it’s so unusually bad, that’s it’s worth trying. It’s probably not, however, worth spending the £11 it costs just to experience its awfulness. It’s available at Harvey Nichols who normally stock such good wines. Perhaps they just saw the label and thought it looked nice. It is a pretty label. The producers say that it goes well with chocolate. You’d be better off with a budget port or just eating the chocolate on its own.

I’m a drinks writer. My day job is features editor at the Master of Malt blog. I also contribute to BBC Good Food, the Spectator and others. You can read some of my work here. I’ve done a bit of radio, given some talks and written a couple of books (Empire of Booze, The Home Bar and the forthcoming Cocktail Dictionary).
View all posts by Henry →
This entry was posted in Wine articles and tagged Amarone, Bolton, Food, Grape, Pinot noir, Pinotage, Shopping, South Africa, Tesco, Wine. Bookmark the permalink.

21 Responses to An unusually bad wine